I’ve been equally guilty as of late of buying veggies on sale to only end up tossing them after a few days because they’ve gone bad – too lazy to slice and freeze them to salvage the find. Especially bananas, I am the worst with those.

So this morning, I found myself with 2 zucchini, on the brink. I literally stood in the fridge and devoured one, so one less to worry about. But, rather then force down the other, I figured maybe there was some crazy easy recipe online that I could whip up quickly and give said zucchini the true end (see that, Trubies) it deserved.

So, I’m Scrolling around on Pinterest and I find this great recipe via chocolatesalad.com. Read the deets…. low carb, protein packed and I had all the fixins’? I was in. Here it is:

3/4 raw zucchini, shredded and strained.
**Note: shredding them into a few, folded paper towels, twisting closed and squeezing gets a good enough amount of water out of them.

1 can of tuna, drained well

Mix ingredients and divide mixture in half. Form 2 round patties to your liking.

Now, the recipe called for cooking spray presumably in a nonstick pan, but I’m a die hard cast iron cook so I used about a tbsp. of olive oil in my 8 inch chefs pan.

Pause: Nothing wrong with the low fat method, but it’s much easier cooking/crisping with a little oil and I wanted this to be tasty, especially since if it didn’t stay together well or cook fully I would’ve scraped the recipe all together. I know me. So, I opted for oil. It’s not a big deal.

Play: Cook patties on each side for about 6 minutes at least. I cooked them on a med low temp, between 5 and 6 the first side and reduced to 4 and covered for full cooking on the other. The cast iron helps a great deal in giving the patties that nice color and crust. 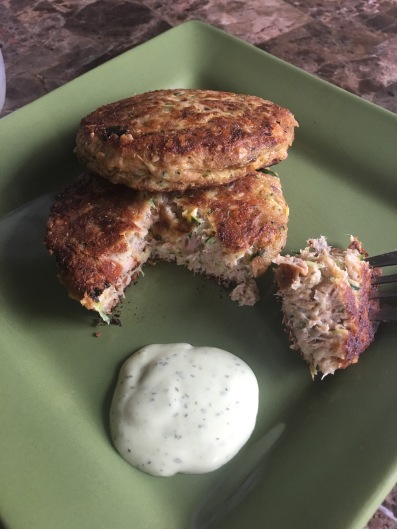 Plate and enjoy. I paired mine with a little avocado ranch packet that was left over from a Cool Wrap from Chik-Fil-A last week. Those things are clutch, and now so is this recipe. Pinterest for the Win

Simple and healthy. Try it, Hip Huggers and tell me what you think…