Ok, so the 2 weeks I REALLY needed to be keeping up

with blogging I didn’t. Now, I’m Fire in the Hole…

I finished my month long running of miles!

2 weeks before the month ended, not too shabby.

I’ve been practicing yoga too, but not as much as before. 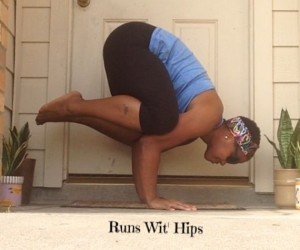 I really do throw myself completely into whatever

my heart desires… but, I am a balanced broad so, my goal is to find the middle ground..

which has been quick yoga outside on the ground as of late. 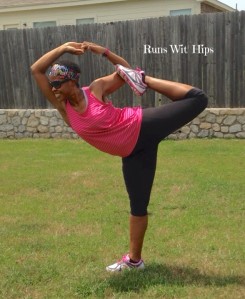 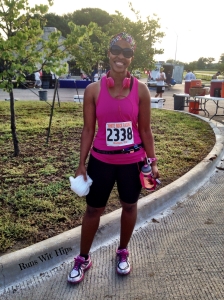 I have ran the Flagpole 8k once before and loooved the route!

“boardwalk” and leads into a higher altitude trail … awesome right?

Buuut, this year it was at Flagpole Hill. Just down the street.

None of the beautiful amenities of running the lake, sadly.

Not the busling walkers and morning joggers.

Not the beautiful lake view and sounds.

But,  it was flat, and it looped around just once.

That must  be a  huge advantage for someone like me because…

In all fairness, I will say, it was a small race.

Even with that, placing was never my goal, not even a thought.

Easily less than 100 people, but who cares? either way,

of the far and few that are embracing their early dirty 30’s such as I am trying to,

I was the one to beat!

And this, I will treasure.

In other running new, I decided to run a half marathon!

‘ That Dam Half’ in Lewisville October 19.

Training for that doesn’t begin until the end of the month,

so I am just keeping things injury free and nimble for now.

I will be doing all the necessary speedwork and tempo runs.

Really going to stick to this plan and try to have a great race!

And a great day, as it is Bring-your-girls-to-visit-dad-and-have-Chili’s-with-dad Day!

Taking a couple days off to rest up for my kinda long 8 mile run Sunday morning.

A new friend is coming to run with so, I plan on…

Have an Awesome Friday and Enjoy the Weekend!!

Question: Have you ever ran a 1/2 Marathon? Awesome?